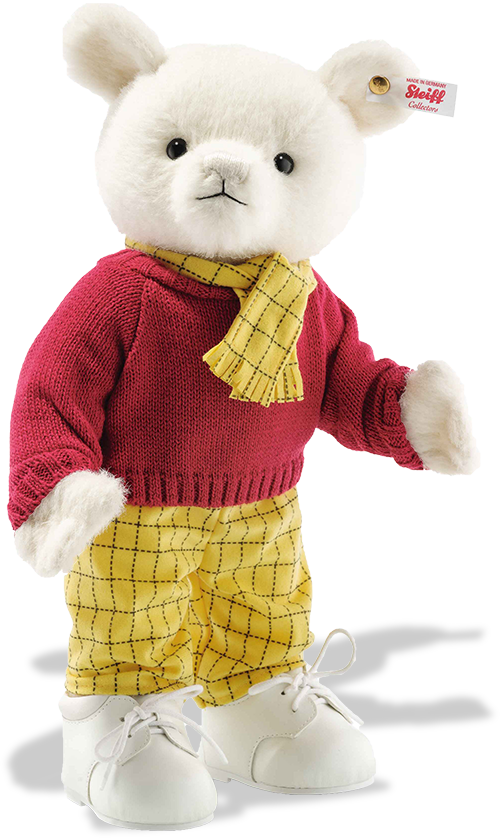 "The loveable bear from Nutwood!"

He was in fact the very first really famous bear.

He is made from white alpaca and is 3-way jointed (means you can move his arms and head).
Small, shiny black eyes and gentle hand stitching giving him his nose and mouth - and dressed just like the original RUPERT. Yellow and black designed trousers, with matching scarf and bright red jumper. Finally you will love his white , laced shoes.


One of the most memorable elements of RUPERT has to be his oh so catchy theme song to his TV series, sung by Jackie Lee, which reached number 14 in the UK charts in 1971.
He first appeared in the Daily Express on November 8, 1920 and has been anthologized in Annuals since 1936.

Join Steiff in congratulating RUPERT on reaching his 100th birthday.

Just play his famous Steiff musical box by pulling the string on his back you will hear the enchanting musical 'RUPERT', that famous classic song.

In the 1920s there was a Vogue for children’s cartoons in British newspapers.
The Express turned to Mary Tourtel who created the little bear – “Little Bear Lost”.
Still running daily, RUPERT is one of the longest running children’s cartoons in newspapers anywhere in the world.
He by far exceeded everyone’s expectations and captured the imagination and affection of the nation.
RUPERT celebrates 100 years of heritage.
Mary Tourtel flung RUPERT into a fairy-tale world of magic spells, ogres, flying witches, dragons and wolves in scenes of true wonderland.
So magical and marvellous were his tales that his image became known worldwide from Abu Dhabi to Zambia and beyond!

He is a childhood favourite of so many and now a Steiff favourite!
Steiff have truly excelled in designing a triumphant interpretation of a magical little bear, no longer lost.

This item is from the Steiff archive, and unfortunately is no longer available for sale

This product is not a toy and is intended for adult collectors only.

This item is part of our Steiff bears archive, and as such is no longer available for sale.

Excellent service and very speedy service. I have used your company many times and have always been very satisfied. I would definitely recommend you to others. Thank you.

Quick delivery and great communication. The bear was gorgeous too!

Always prompt and helpful service. I would definitely recommend Bel Air Gallery to others.