The history of Steiff teddy bears

A timeline for Margarete Steiff, and her beloved bears

24 JULY 1847 - MARGARETE STEIFF IS BORN On 24 July 1847, Margarete was born in Giengen, near Ulm, Germany, the third of four children. Her father was a master builder, Friedrich Steiff, her mother Maria Margarete Steiff, née Hähnle. 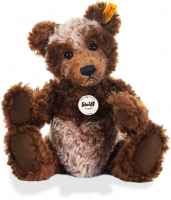 1849 - A CRUEL STROKE OF FATE When Margarete was 18 months old, she suffered a high fever and as a result her legs became paralysed and it was painful to use her right arm. Three years later, a doctor in Ulm diagnosed her with polio. Many attempted cures and doctor visits were all in vain and her parents begin to despair.

1858 - FIRST CHALLENGES Full of zest for life, Margarete fought to lead a normal life. She was taken to school in a handcart by her siblings and neighbouring children. A woman living near the school carried her up into the classroom every day. In spite of the pain in her right hand, Margarete also took sewing lessons, initially against her father's wishes. At 17, she finally completed her training as a seamstress. 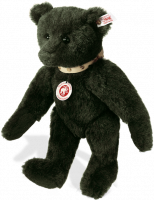 1874 - A LITTLE WORKSHOP OF HER OWN Margarete's father converted the family home and set up a workroom for her - a small dressmaking workshop. From her first earnings, Margarete bought a sewing machine of her own. Because the flywheel on the right-hand side was difficult for Margarete to operate, she had the ingenious idea of simply turning the machine around.

1877 - FIRST STEPS TOWARDS GOING INTO BUSINESS Adolf Glatz, her cousin's husband, advised her to go into business on her own. Margarete opened a ready-to-wear felt clothing business to sell clothing and household articles she made herself. Before long, she was able to take on several seamstresses.

1879 - THE "ELEFäNTLE" In an issue of a magazine called "Modenwelt" dated 8th December, Margarete saw a pattern for a small elephant made of fabric. Based on this design, she sewed a pincushion shaped like a small elephant, the "Elefäntle". Soon the small fabric animals proved to be very popular - as toys for children.

1880 - THE BEGINNINGS OF A FAMILY COMPANY The official date of foundation of Margarete Steiff GmbH. The "Elefäntle" developed into the company's first big-selling product. Her younger brother, Fritz, successfully sold the felt elephants at the nearby Heidenheim market. Six years later, Margarete had sold over 5,000 elephants. At this point, Margarete also designed other fabric animals. 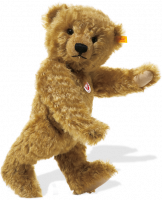 1890 - THE FELT TOY MANUFACTURING FACILITY Margarete's brother Fritz built his disabled sister a house with a suitably equipped living area on the first floor and a small shop on the ground floor. The house was named "Felt Toy Manufacturing Facility" (Filz-Spielwaren-Fabrik). Today, the street in which this house is found is called "Margarete-Steiff-Strasse".

1893 - THE FIRST TRADE FAIR On 3 March 1893, the felt toy manufacturing facility was entered in the commercial register as "Margarete Steiff, felt toy factory Giengen/Brenz". The toys were showcased for the first time at the Leipzig Toy Fair. Margarete now had a workforce of four seamstresses and ten outworkers. 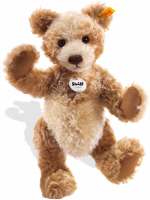 1897 - AN ADDED INJECTION OF CREATIVITY Richard Steiff, Margarete's favourite nephew, joined the company. Richard studied at the School of Art in Stuttgart as well as studying in England. His sketches of animals form the basis of many Steiff creations

1902 - BIRTH OF THE TEDDY BEAR Richard designed "Bear 55 PB", the world's first toy bear with jointed arms and legs. While looking for a suitable material for the fur, Richard found the cuddly and dyeable mohair plush, manufactured by the Schulte pile-fabric weaving mill in Duisburg.

1903 - TEDDY BEAR TAKES THE WORLD BY STORM Margarete herself was rather sceptical, but allowed Richard to present his bear at the Leipzig Toy Fair. The breakthrough came when an American businessman discovered the bear and placed an order for 3,000. The bear enjoyed unprecedented levels of sales in the USA, where, from 1906 onwards, it is sold under the name "Teddy bear" - after the US President Theodore "Teddy" Roosevelt.

1904 - STEIFF - "BUTTON IN EAR" The trademark "Steiff - Button in Ear" was developed by another of Margarete's nephews, Franz Steiff. The aim of this trademark was to fend off the vast numbers of cheap imitations and to make the company's own high-quality products unmistakable. Margarete won the Grand Prix at the World Exhibition in St. Louis. 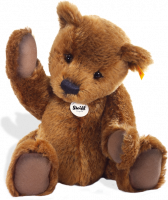 1906 - AN INTERNATIONAL COMPANY IS FOUNDED Founding of Margarete Steiff GmbH - the name under which the company still trades.

9 MAY 1909 - LARGER THAN LIFE Margarete Steiff died of pneumonia at the age of 61. A hard blow for the whole Steiff family, her friends and her employees. Margarete's nephews took over the running of the company and people all over the world have been keeping her flame alive ever since. Margarete Steiff created something that is larger than life

1910 - STEIFF WORLDS EMERGE Steiff won the Grand Prix at the World Exhibition in Brussels, captivating onlookers with a variety of rag dolls and soft toys. The "Steiff Circus" used mechanically moving figures for the first time. Four years later came the "Noah's Ark", one of the most successful showpieces ever.

1919 - HARD TIMES During the tough war and post-war years, Steiff had to adapt its product range accordingly, with substitute fabric being used to a great extent. A kind of cellulose material was used for what became known as the "paper Teddy bear". Furthermore, toys made of domestic woods were included in the product range. 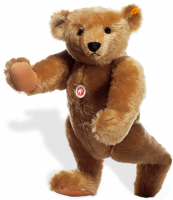 1925 - FOUR-LEGGED FRIENDS The advent of the Golden Twenties brought about a revival in demand for fabric and plush. Steiff introduced production lines to cope with the high demand, above all for its toy dogs. Molly the Steiff dog proved to be irresistible and over half a million were sold by 1932.

1947 - NEW BEGINNINGS The company resumed production after the end of the Second World War. A mere 12 months later, Steiff has a workforce of almost 1,000, a figure which is to double five years later.

1951 - MECKI TAKES THE WORLD BY STORM Mecki, the hedgehog mascot of German TV magazine Hörzu and a figure from the Diehl Brothers' puppet films, was produced under licence by Steiff in the form of a doll. The Mecki doll quickly became a top seller the world over.

1953 - HAPPY BIRTHDAY, TEDDY BEAR The Teddy bear celebrates its 50th birthday. The "Jackie" anniversary bear was presented with a whole new design - as a cute baby bear with a hint of a navel.

1980 - 100 YEARS OF DREAMS IN FABRIC AND PLUSH The Margarete Steiff Museum - predecessor of today's "Die Welt von Steiff" Adventure Museum - opened in Giengen to mark the 100th anniversary of the company. At this time, Steiff also began producing limited numbers of replicas for Steiff enthusiasts. 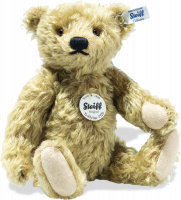 1984 - CHILDREN'S FAVOURITE PETSY A firm favourite with the young, Petsy captureed the market and the hearts of Steiff enthusiasts around the globe.

1992 - THE STEIFF CLUB On 1 April, the Steiff Club was founded as an organisation for enthusiasts and collectors of Steiff animals. With exclusive Club benefits and Club editions.

2005 - 125 YEARS OF STEIFF To celebrate the 125th anniversary of the company, the new Steiff Adventure Museum "Die Welt von Steiff" opened its doors for the first time. Steiff has created more than 20,000 different animals over the last 125 years. The crowning glory of the museum is the extremely valuable 125 Karat Teddy bear edition.

2006 - THE STEIFF SUMMER For the very first time, the Steiff Summer event was held on the company grounds in Giengen - a giant summer party for Steiff enthusiasts and families with lots of exciting attractions and a promise of fun for guests of all ages.